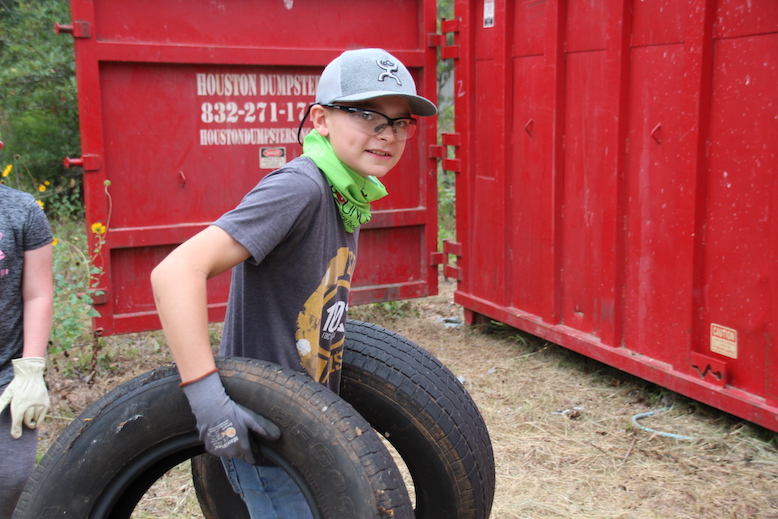 “It’s amazing how many people are willing to come out and do something like this. Sometimes we think people don’t do things like this anymore, but they do. This bunch did,” Pam Shaw said as she watched a group of students from First Baptist Church of Plano build a new fence for her backyard.

The students were participating in BOUNCE Back Home Day of Service, an initiative created through Texas Baptists’ BOUNCE Student Disaster Recovery that gave students the chance to participate in missions in their communities. Eight churches participated with a total of 264 students and leaders. The student ministries found people and ministries in their neighborhoods that needed assistance and sent the students out, wearing face masks, to serve on June 27. 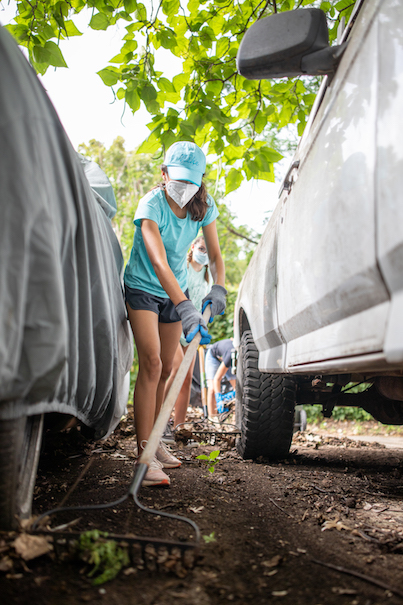 The COVID-19 pandemic led to the cancellation of many mission trips because of travel restrictions, safety concerns and global uncertainty. For David Scott, director of BOUNCE, this was not the end of a summer of missions and service, but a chance to creatively challenge students to find missions opportunities in their own communities. This gave students a chance to serve safely without the risk of travel and also taught them that missional living can happen in your own neighborhood, not just in faraway places.

“We get excited about going to different places and serving there, but there’s so much to do at home too,” David Scott, director of BOUNCE, said. “Even though this was not what we initially planned, we still made an effort to encourage kids and youth groups to be on mission in their communities. And that’s a big deal.”

FBC Plano’s students found an opportunity to serve two elderly ladies who lived across the street from each other. Each woman lived alone, and a couple of the youth had been going regularly to mow their lawn and take care of small tasks. Both of the women’s backyards, however, had become overgrown and unsafe. 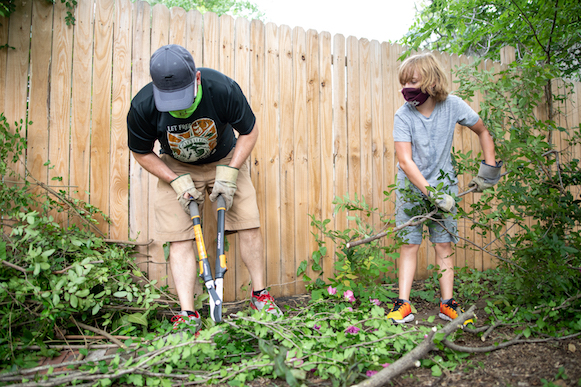 Thirty-four students and leaders served at the two houses. They set to work, pulling weeds, cutting tree branches, putting in pavers and clearing debris. At Shaw’s house, the students also built a new fence gate, as the old one was deteriorated.

Ian McGee, a junior, explained that he participated in BOUNCE Back Home because he had done BOUNCE before and seen the importance of serving others. The pandemic had brought normal life to a halt, and many of the students had few opportunities to serve or engage with others. This service day gave them a valuable opportunity to add meaning to their summer vacations.

“You don’t want to be sitting at home doing nothing when there are people out there who need help,” McGee said.

East of San Antonio, First Baptist Church of La Vernia split their team of 27 students and leaders into two worksites. At one site, a small group went to a local food pantry to create food kits that could be distributed quickly and hygienically by the pantry. The other group went to serve at a local woman’s home whose husband had died recently. He was, in the woman’s words, a “hoarder,” and there was clutter on almost every inch of their two-and-a-half acre lot. 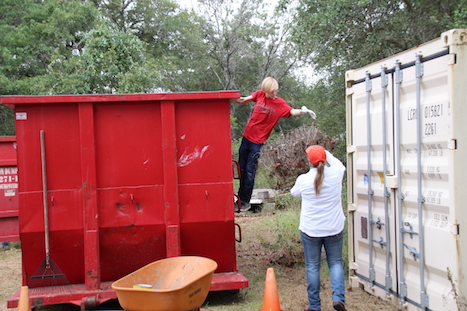 Jonathan VanBruggen, student ministry pastor at FBC La Vernia, explained that the group had originally planned to serve in Houston. However, when they realized that was not going to happen, VanBruggen quickly adapted to find needs to meet in their own city. Since it would be one day of service instead of a whole week, VanBruggen wanted to ensure that as much impact as possible was made. He hired dumpsters, and church members brought their tractors to the house to help clean large items off her property.

“This was our big program for the summer. We normally do a mission trip with BOUNCE each year, because we believe in the mission of BOUNCE, reflecting Christ in our community and making disciples. We were supposed to go to Houston, but instead, we stayed and had a La Vernia experience – we saw snakes, although no one got bit, and we had tractors helping us out,” VanBruggen explained.

In the evening, a worship service was live-streamed for the student ministries to participate in. VanBruggen said that even though the students were tired from a long day of service, it was still meaningful to gather together and worship.

The day was all about helping students see the missional opportunities in their own neighborhoods. VanBruggen explained that when a group gathers together, they can make a huge difference for those around them.

“Yes it was some sweat work for us, but it really wasn’t that big, but it was a huge blessing for the homeowner,” he said. “I wanted this day to be as much of a blessing as possible.”