Ninety to 95 percent of buildings in the small town of Refugio were damaged during Hurricane Harvey. That includes First Baptist Church Refugio, which lost most of its roof to the strong winds, rendering the building unusable. 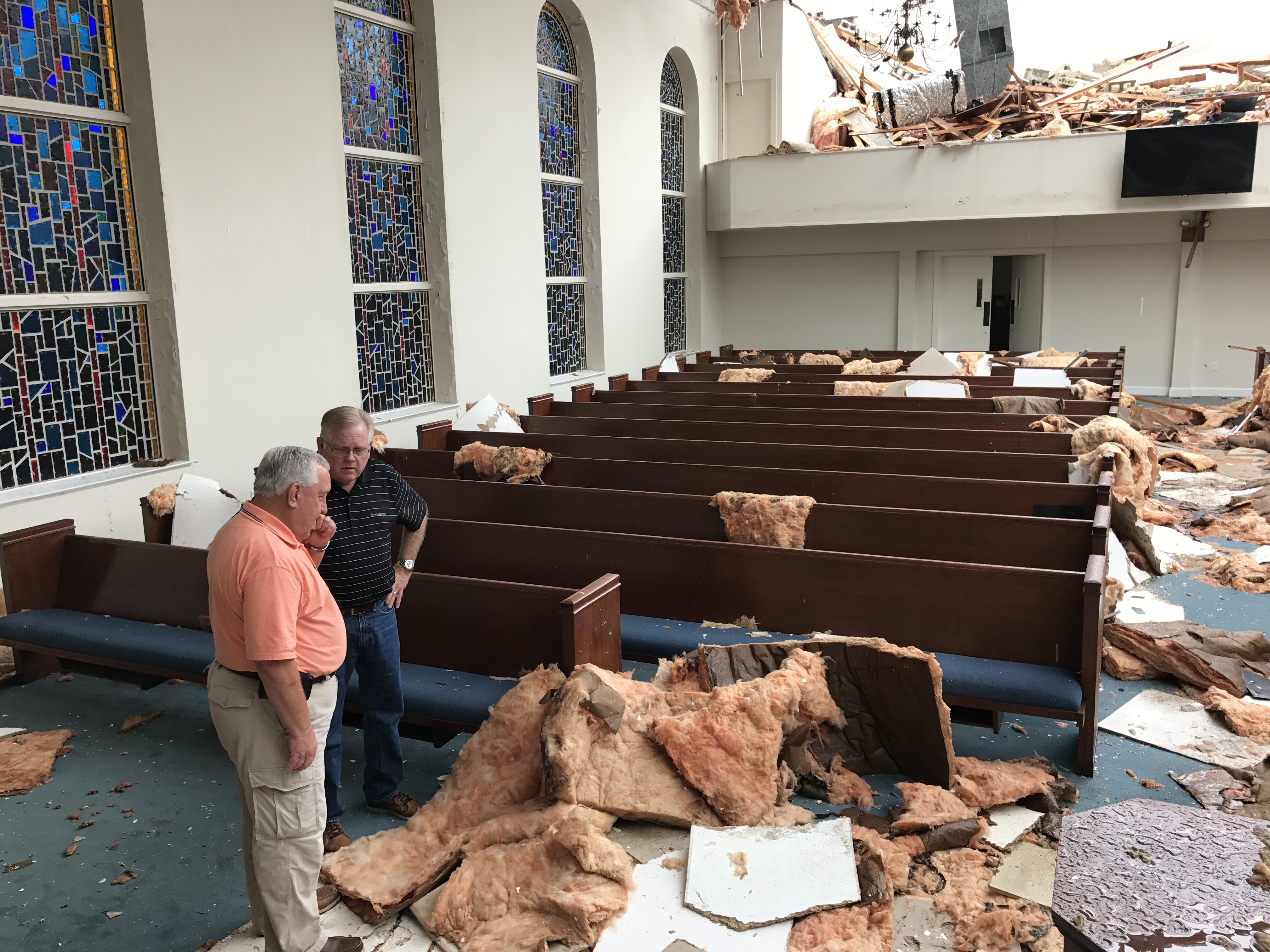 “The storm essentially blew about three-quarters of the roof off the sanctuary, so the sanctuary was a total loss,” said FBC Pastor T. Wayne Price. “Our educational building was about one-fourth damaged. We still do not have the exact numbers, but we are talking about an interior rebuild. Everything in the sanctuary was destroyed.”

Price said the majority of his congregation was also affected by storm damage with two families having to move in to live with friends and family. Price’s home, thankfully, received minimal damage.

“I would say that 95 percent of our members experienced some kind of damage and loss. Some of it was significant, some not as bad. Our house, thank God, was just in good shape when we arrived back (from evacuation). Everything around it was broken and trashed but we were extremely grateful.”

The congregation, which averaged 130-150 people people before the storm, is at about 100 now. They met several Sundays at a local funeral home, but have been meeting at their local elementary school since school began. The cafeteria serves as a sanctuary. Three classrooms are used for adult Bible studies and a fourth is used as a nursery. Children and youth scatter to different corners of the cafeteria for Bible study.

“We have a keyboard that we are using as the instrument. We sing with the keyboard and project the words on the cafeteria wall. We are basically moving along in that regard. It’s not the most comfortable place for worship, but we are grateful we have a place. We could be in the parking lot.

Thankfully, Price said the church has received enormous amounts of support and is on its way to recovery.

“Help has been phenomenal, just amazing and totally unexpected and unbelievable. We’ve had churches all over Texas and additional states who have given generously to help with the church rebuild and also with meeting needs in Refugio. We’ve received gifts from at least 20 churches and probably 30-40 individuals - people outside our church family. We’ve had people come from as far as California, Alabama, Maryland and Iowa. It’s been unbelievable the help that our community and church has received. They’ve helped financially, but they’ve also come with manpower to help with initial cleanup and roofing. Just to name a few Texas churches who have offered significant support: First Baptist Wimberly, First Baptist Pasadena, First Midland, First Waco and First Pflugerville.”

Price said that the church is also committed to helping those in greatest need in the Refugio community.

“We have two designated funds in our account; one is called hurricane FBC, which is for funds that will be used in the rebuild and another is hurricane benevolence, to help those in our community who still need real help. We’ve made it our practice to give even from the money that’s come in for the rebuild. We set aside 10% of that to go towards the benevolence fund.

“We are extremely blessed,” Price continued. “The repair will be finished in a minimum of six months, probably seven or eight and we will have our building back.”

Price said that just 10 days prior to the storm, the church received windstorm coverage through their insurance.

“When the storm hit, we had not even made our premium payment yet. They have already sent one major check in. We don’t have the final numbers yet, but it looks as though we are going to be fine so this is all provision from heaven.

“Obviously we are more grateful than we’ll ever be able to express because we could have faced this with very few financial reserves,” said Price. “We had saved a good sum of money for a small church, but you never have enough money when something like this happens.”