On Nov. 15, Hispanic Baptists gathered at Baptist University of Américas (BUA) and online to celebrate the Texas Baptists en Español Launching Service. The service was held on the first night of the 2020 Texas Baptists Annual Meeting.

David Hardage, Texas Baptists executive director, also greeted the service’s attendees and thanked them for their part in ministering to Hispanics across Texas.

“We are excited to launch Texas Baptists en Español and thank you for taking part. We could not do the ministry we do and reach the people we do without you,” he said.

Intentional focus of the new initiative

A panel led by Marlon Rios, ministry assistant for the Office of Hispanic Ministries, explained the origins and purpose behind the new ministry. The panel included Rolando Rodriguez, director of the new initiative; Lorenzo Pena, director of Cultural Engagement; and Noe Trevino, Texas Baptists church starter.

Rodriguez, explained that this new effort is a rebranding of the Office of Hispanic Ministries, but it also goes deeper, providing a unified place for Hispanic churches to connect with Texas Baptists staff and resources.

“It was an intentional focus, not just to change the name, but to have an intentional strategy. Our eight areas of focus are discipleship, evangelism, church starting, reaching the next generation, leadership development, missions, education, and church health and revitalization,” Rodriguez explained. “It’s a strategic plan to make an impact here in Texas.”

Pena spoke of the origins of Texas Baptists en Español, explaining that it arose from a continually rising need to address the rapidly growing Hispanic population in Texas. He explained Vision 2000, a strategic plan to reach Hispanics in Texas written and developed by a Hispanic Task Force of convention staff in 1991, was the foundation that much of the new initiative was built on. Texas Baptists en Español will continue that work while better connecting Hispanic churches with the entirety of the convention.

Trevino expanded on the creation of the new initiative, saying that a team of 34 individuals was assembled to develop a new strategy. The team included Hispanic pastors, Texas Baptists staff and leaders of the next generation. The new initiative will encompass more than 1,100 Hispanic churches across Texas.

Pena honored for 20 years of service 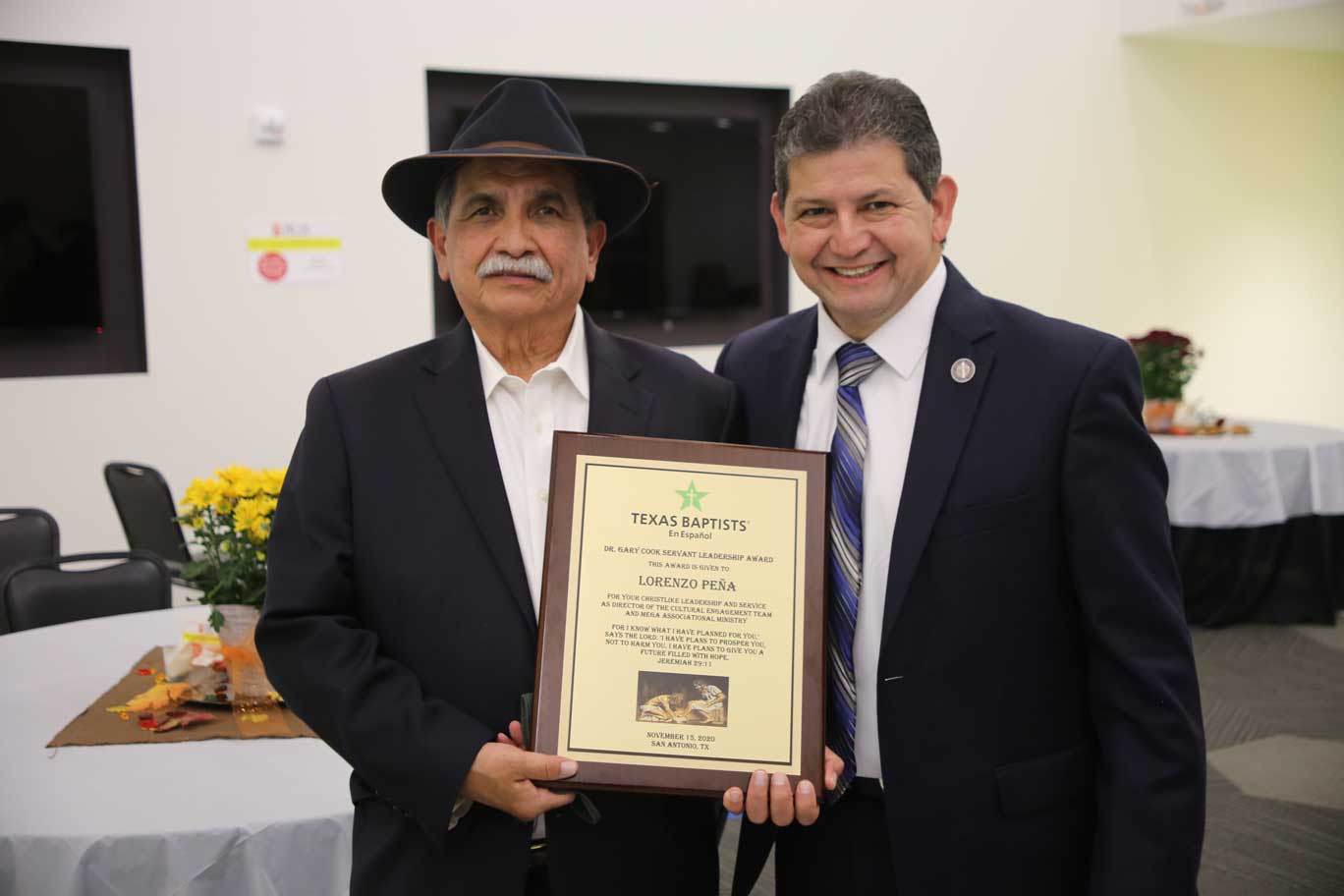 Pena was awarded the Gary Cook Servant Leader Award, which celebrated his 20 years of service with Texas Baptists. Rodriguez spoke of Pena’s gifts in leadership, administration and teaching.

“We’re so proud of Lorenzo for getting this servant leadership award. He’s been all over the state serving and helping ministers for the last 20 years,” Cook said. “If you went around the world looking for an example of a servant leader, you would find it in him.”

Abe Jaquez, BUA president, thanked everyone for attending the conference and spoke of his excitement for the future of BUA and Texas Baptists.

“I believe that tonight we have lots to be joyful about, and I'm joyful that we get to be a part of that. We look forward to deepening our relationship with Rolando and Texas Baptists en Español … My prayer is that God would continue to bless our work as we continue to reach people across Texas,” he said.

Closing out the night, Victor Rodriguez, Hispanic Evangelism associate and Discipleship specialist for Texas Baptists, challenged the new Texas Baptists leadership and service attendees. He shared from 2 Corinthians 5:14, reminding them of Paul, who was humble and gave all the glory to the Lord. He never forgot the calling that the Lord gave him. Rodriguez urged the new Texas Baptists en Español leaders to be humble and to hold tight to the calling that the Lord has given to them. He told leaders to hold onto these three key principles for Texas Baptists en Español: humility, compassion and passion to reach the lost.

The full rally can be viewed here.