It was a historic day in a historic town as Samuel W. Prestidge, Jr., retired director of Church Music for Texas Baptists, and Tillie Burgin, founder of Mission Arlington, were honored with the 2016 Texas Baptists Legacy Award during a special worship service at Independence Baptist Church on June 5.

Independence Baptist Church, the oldest continuously active Baptist church in the state of Texas, typically meets across the street in a newly constructed building, but each year on this Sunday, the congregation joins with Texas Baptists from across the state to meet in the original sanctuary.

Sitting on a pew once notably occupied by Texas’ famous first President Sam Houston, Prestidge was joined by family and friends from Shiloh Terrace Baptist Church, his longtime church home. Jim Burgin and his wife, Debby, were also present to accept the Legacy Award on behalf of his mother, Tillie. 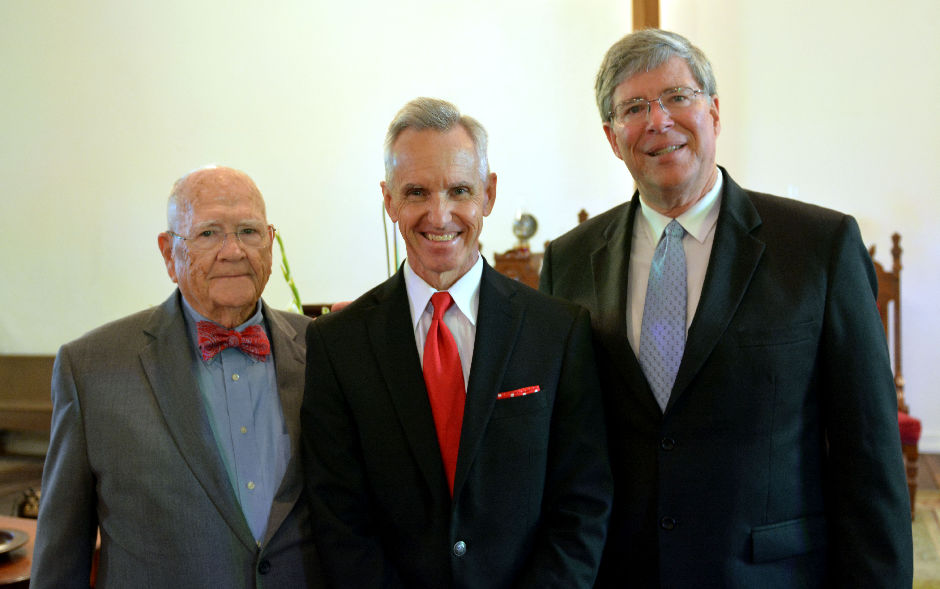 “We are here because this is the Lord’s day and His house and His people and our purpose is to worship Him,” said Texas Baptists Executive Director David Hardage. “We can talk about Tillie and Sam today all in the context of honoring and worshipping the Lord.”

Drawing from Jesus’ words in Matthew 25:23, Hardage preached about the faithful work of servants of the Lord.

“We are really never more like Jesus than when we are in service to others,” Hardage said.

He went on to talk about faithfulness as being who we are as Christians and “good” as what you do in service to God.

“We are not saved by our good works, but we are called to do good works by doing good for others,” he continued.

“To Tillie and Sam, I am in no way or shape to be seen as the Master, but I do feel it is right to say ‘Well done good and faithful servant.’”

While accepting the Legacy Award for his mother, Jim Burgin shared, “My heart is about what God has done. This is not about Tillie or the Burgin family. We want to glorify Him.”

Tillie Burgin began Mission Arlington in 1986, following seven years of praying for the city she called home. What began as six Bible studies in apartments has turned into a 24/7 ministry including 349 different apartment congregations and more than 45,000 student volunteers that cycle through each year, learning and developing ministry skills.

“I want to say ‘thank you’ to the Texas Baptists family – people in those early days who could hear God’s heart to help our city,” said Burgin, who serves as Director of Communications for Mission Arlington.

“Thank you for honoring us and we want to you also honor you for your investment in this ministry.”

“Sam received his call as a minister of music and God has a bigger dream in mind as he began as Director of Church Music in 1961,” McCall said. “From growing church choirs and training church leaders – he taught us to grow beyond our dreams and plans. He changed the lives of thousands of music leaders in Texas. He was a visionary, risk-taker and brilliant leader in his own quiet way.”

“Nobody in Texas Baptists history has ever accomplished what he accomplished. His ministry was a divine appointment from God,” McCall continued.

“To God be the glory,” he said as the congregation rose to a standing ovation.