Today we mourn, tomorrow we dream 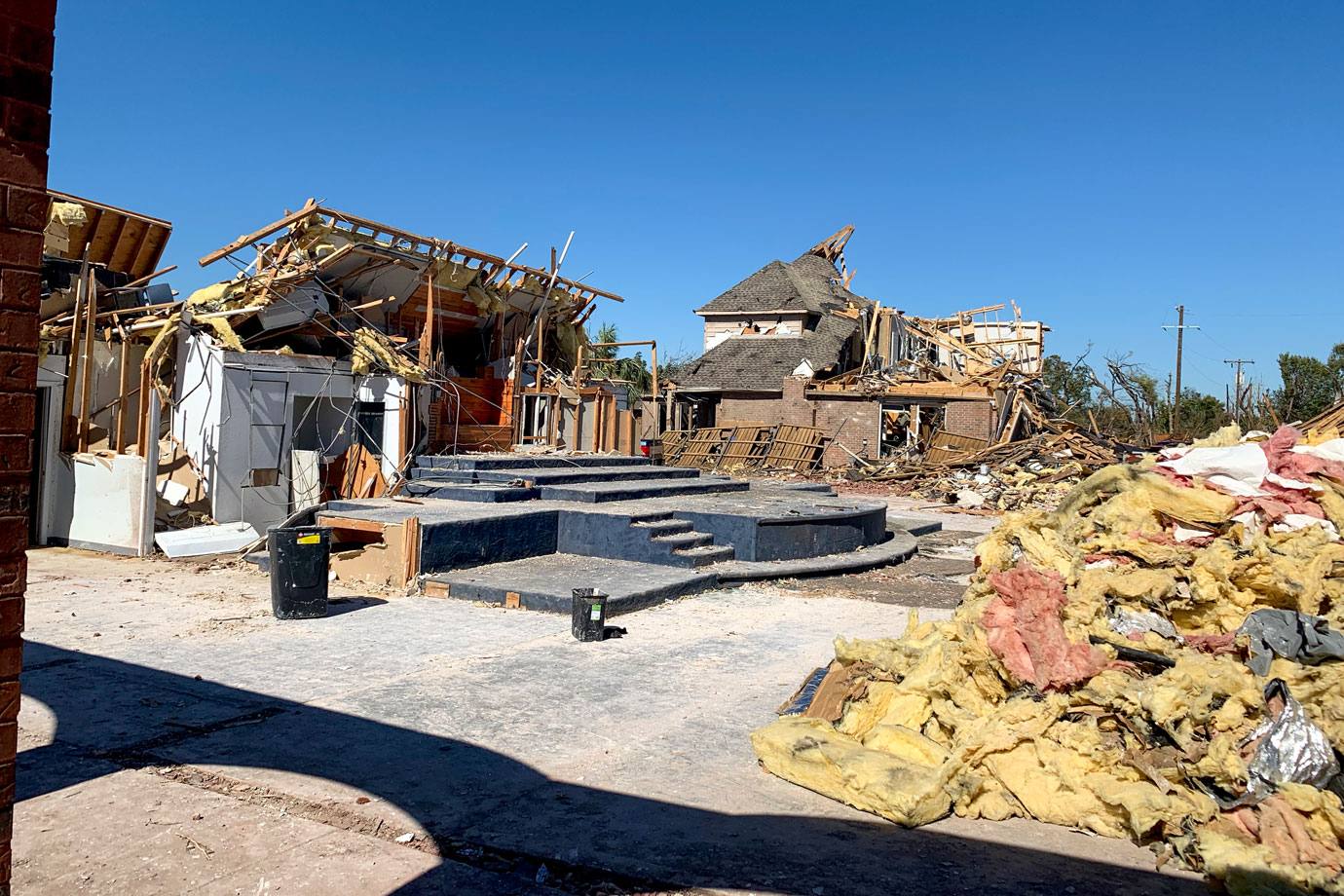 DALLAS—One week after the EF-3 tornado destroyed Primera Iglesia Bautista Dallas’ main building, the congregation joined together for worship under a tent in the church parking lot on Sunday, Oct. 27. Pastor Ricardo Brambila described the service as a time for mourning and celebration of all God had done in the building.

“Today, we mourn and tomorrow we dream,” Brambila said.

As he addressed the 200 people under the tent, he said, “There is a building behind me, but the church is in front of me.”

Rolando Rodriguez, director of Texas Baptists Office of Hispanic Ministries, shared that within 24 hours of the tornado’s destruction, churches and individuals from around the state reached out to see how they could pray and help the Primera Iglesia Bautista congregation.

“We are praising God there were no casualties, and we look to God for what He will do next,” Rodriguez said.

Gus Reyes, director of Texas Baptists Christian Life Commission and a former pastor of Primera, shared that individuals from across the country and across denominational lines have prayed for Primera. During his prayer on Sunday, Reyes thanked God for the countless individuals who had been impacted through the church’s ministry, as well as for the wedding celebrations and baptisms which took place in the building.

“God, this moment is yours, not ours,” Reyes said. “We give you glory because we know you are in charge.”

When Brambila came to pastor the church two years ago, the church had about 20 attendees on  Sunday mornings, and many members were driving across the Metroplex to attend. He led the church in a new outreach ministry to the local community. Now more than 120 attend on any given Sunday with many from the surrounding neighborhoods. On Wednesday evenings, the church often hosts activities for up to 50 local children. 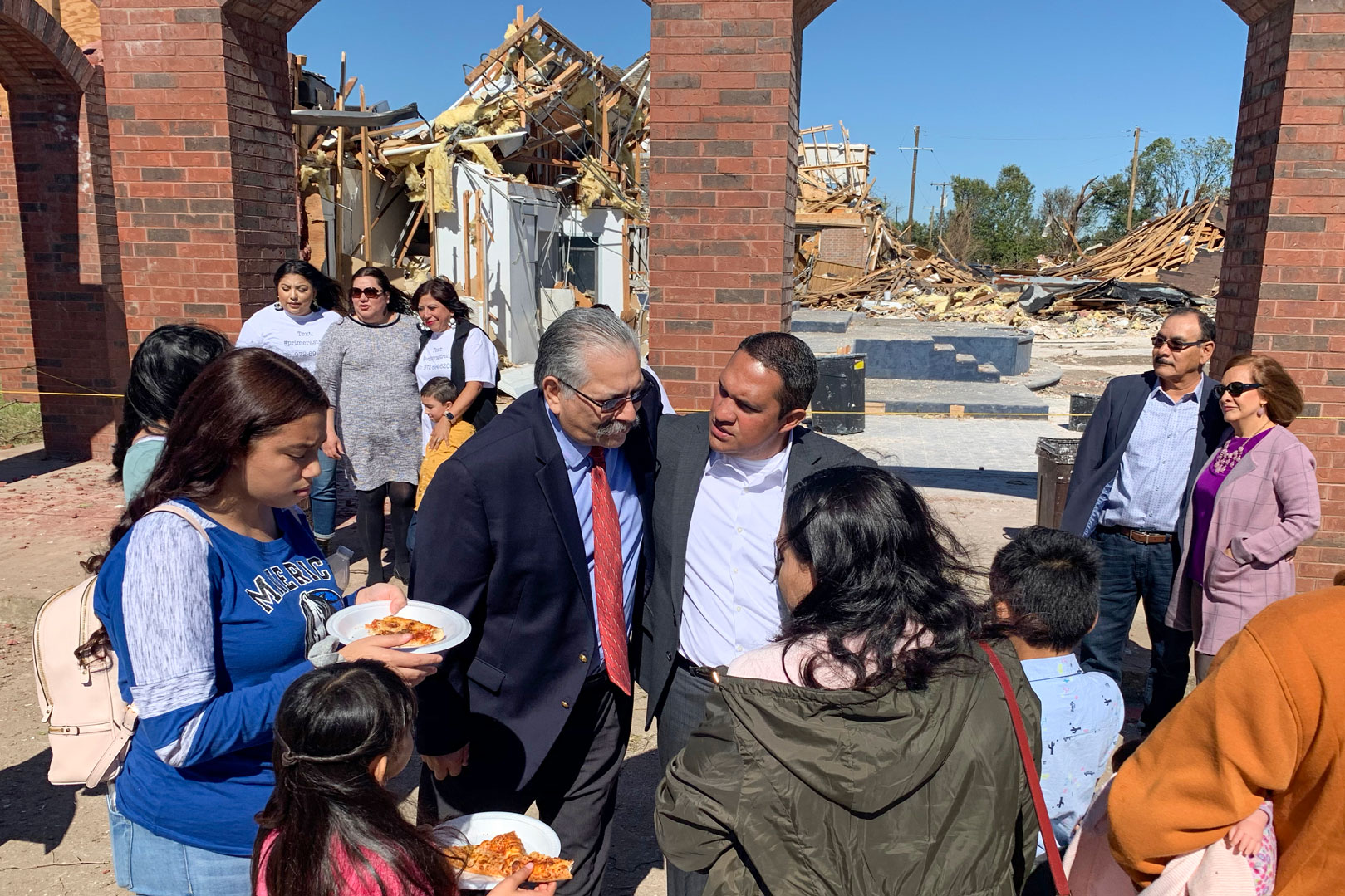 Being connected to the community made a big impact on the night of the storm. One church member, Francisco Flores, was inside the church building preparing for his Wednesday night lesson when he received a tornado warning alert on his phone. Within five minutes, he was running through the sanctuary to seek shelter when the tornado hit the building. Flores recalled a loud suction sound and the doors and windows of the church bursting from pressure. He was pulled toward the altar and a door fell on him, providing much-needed protection from the surrounding debris. Flores called Brambila and told his pastor he was trapped under a door and that the majority of the building was destroyed. Brambila got in touch with nearby church members who rushed to the church to help Flores climb out of the rubble and care for him.

In the next 24 hours after the storm, Brambila heard from dozens of churches, individuals and organizations which offered help, prayers and encouragement. During Sunday’s service, Brambila recognized Texas Baptist Men (TBM), Texas Baptists, Buckner International, Dallas Baptist Association, WMU of Texas, The Promise Church, Lake Pointe Church en Espanol, Park Cities Baptist Church in Dallas and many others. On Saturday, approximately 250 volunteers came to the church site to help clean debris and minister to homeowners in the area who were impacted by the storm.

At the conclusion of the service, Brambila invited the church’s three deacons to come forward. The congregation laid hands on them and prayed for God’s strength as they helped lead the church in the coming days.

The Church built on the rock

Drawing from Matthew 16:15-19, Pastor Brambila preached the message on Jesus’ description of the Church built on the rock. 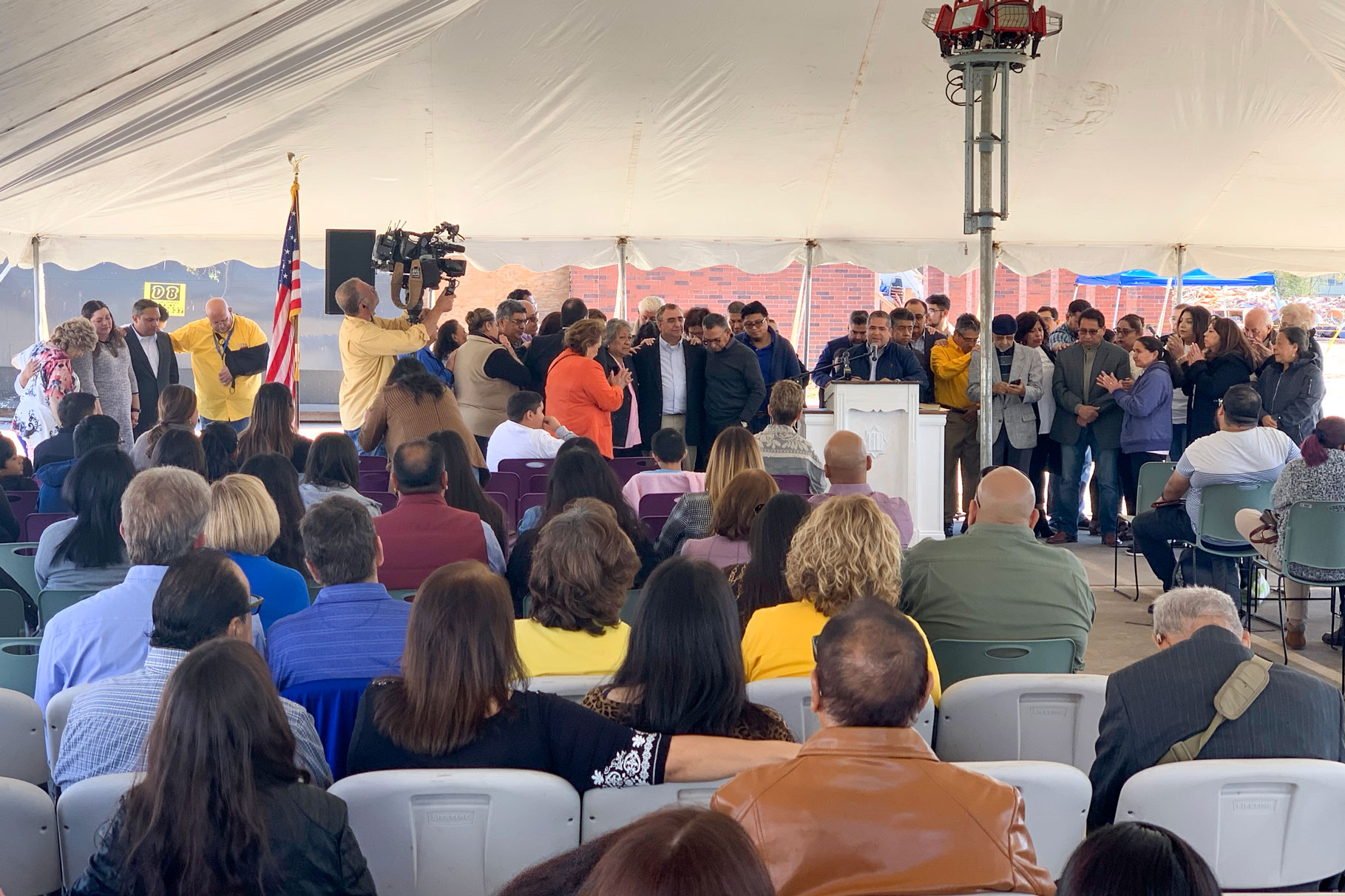 “These days I’ve realized there are things I’ve worried a lot about when all I needed was Him - Jesus,” Brambila said. “There may be one day when you need to lose everything to realize all you needed was Jesus. He is Lord and there is no one more important than Him … That cannot be taken away by a tornado. We are built on the rock.”

Brambila reflected on Jesus’ statement in Matthew 16:18, “I will build my church and the gates of hell shall not prevail against it.”

“Today, we lay down a great friend, a great building. Thank you Lord for the memories,” he said. “But you can not look back - let’s look forward.”

Royal Haven Baptist Church has provided a meeting space for the Primera congregation for the coming weeks. Click here to give to support churches impacted by the North Texas tornados.